See the town of Sant Antoni from another perspective, exploring not only its history but also its colorful urban art. Join this interesting walking tour through one of Ibiza's most vibrant cities. 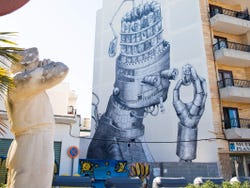 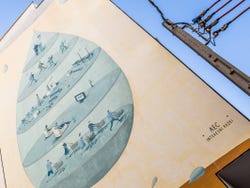 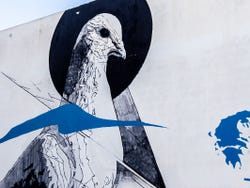 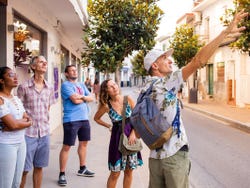 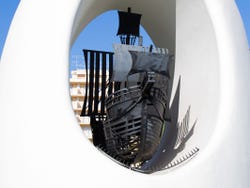 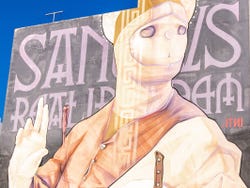 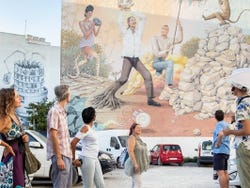 At the indicated time, we'll meet on Calle de s'Embarcador in the Ibizan town of Sant Antoni, where we'll start off on a free tour that will take you to explore this colorful city and its many charms. Let's go!

We'll start by skirting the port of Sant Antoni until we reach The Egg, a curious monument standing 6 meters high holding an iron replica of the famed Santa María ship.

From there, we'll begin to see some examples of Sant Antoni's street art. National and international artists like Phlegm, Interesni Kazki, Pablo Herrero and David de la Mano are just a few of the names that have left their mark on the city's vibrant urban art scene. As we make our way through the city, you'll see beautiful works prominently displayed on the facades of buildings, many with an air of criticism, such as La Revolución and Capitalismo.

While we talk about why this city has become an epicenter of urban art, we'll also admire other important areas of Sant Antoni, such as the 14th-century Church of Sant Antoni de Portmany, the Town Hall, the Yacht Club, the famous Plaza de los Pintores ('painters' square') and the old Casa Colonial. A picturesque walk that will make you fall in love with the island all over again!

After over two hours of sightseeing, we'll say goodbye at the seaside path of Passeig de Ponent to enjoy a breathtaking sunset - a truly magical way to end the tour!

Free tours do not have a fixed price, rather each person offers the guide the amount they consider appropriate, depending on their level of satisfaction.

Please check local restrictions before traveling. All of our services comply with recommendations to avoid the spread of Covid-19. Show more

Tours or activities will not consist of more than 25 people per group.

A safe distance of one metre between clients will be maintained whenever possible.

The use of masks is obligatory. The client must bring their own mask.

All those running the service (guide, driver etc...) will wear a mask throughout its duration.

Handing out of printed material such as maps or brochures will be avoided.

Showing your voucher on your phone will be enough, and it is not necessary to print anything.

The activity takes place with a guide that speaks in English.

You can book up to the start time, as long as there are places remaining. Book now to guarantee your spot.

Electronic. Show the voucher on your phone.

Wheelchair accessible. This must be indicated in the reservation. An accompanying person is required.

All services published on Civitatis are carried out in accordance with our Sustainability Code. Specifically, this activity applies the following practices: Show more

No printing of documentation required.

If you have any other questions please contact us.

If you are not able to attend the tour, please cancel your reservation, otherwise the guide will be waiting for you.

Where does the activity end?

Where does the activity end?

These are genuine reviews written by our customers.

I travelled by myself
8

The experience has been unbeatable, the guide exceptional in terms of knowledge and content, very enjoyable tour. I recommend this activity 100%. Opinion translated. Show original.

I travelled with my partner
8

I travelled by myself
10

I travelled with my partner
Show all the reviews
like

10 / 10 1 review
Discover the Ibiza coastline with this Ibiza Coves Boat Tour. You'll enjoy a tour on board the "Salvador", a boat from the 160s to remember the hippie movement.
US$ 79.20
Book
like

No rating yet
Come and rent a Seabob, a water propeller that'll allow you to swim and dive effortlessly in the Ibicencan waters of San Antonio - an exciting experience.
US$ 282.90
Book
like

8.40 / 10 5 reviews
Have you ever captained your own boat? This is your opportunity! Tour the coast of Ibiza on a boat that doesn't need a licence or previous experience.
US$ 254.60 per group
Book