The old town of Ibiza, a World Heritage city, holds extraordinary historical monuments. Learn about its history with this private tour! 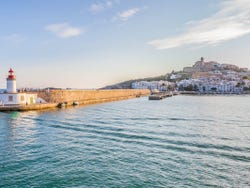 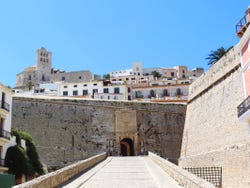 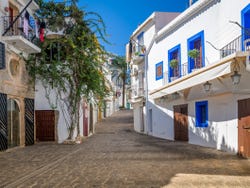 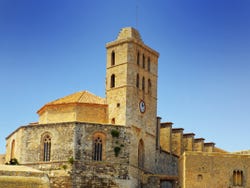 Only 15 Spanish cities have been declared World Heritage Sites, and one of them is the capital of Ibiza. From the port of this beautiful Balearic city we'll set off on a private tour through the most emblematic streets of its old town.

The walled enclosure of Dalt Vila, in the heart of the historic centre, will be the first stop on this private tour of Ibiza Town. Its walls are a living vestige of the different Mediterranean communities who fought in this area of the Balearic Islands. Its strategic location made it the subject of disputes over the centuries which we'll find out about on the tour.

As well as its fort, the Ibizan capital is also known for its picturesque streets of whitewashed buildings. Many of these beautiful white buildings experienced a boom in the 60s due to the famous hippie movement that we'll talk about during the tour.

In the historical part of the city we'll also admire civil and religious monuments side by side. For example, the Ibiza Town Hall complements the magnificent Ibiza Cathedral. As a final touch to this private tour of Ibiza Town we'll recommend you some of the best places in the city to go shopping. Did you know that the Ibizan markets are among the most famous in the Western Mediterranean?

If you book a private tour, you'll be given a much more personalised service for just you, your partner, family or friends. You'll also be with an English speaking guide and will even save money even if you are a large group.

This is a private tour organized for you and your partner, friends or family.

All of our providers comply with local legislation and applicable health recommendations to avoid the spread of Covid-19. Show more

A safe distance of one metre between clients will be maintained whenever possible.

All those running the service (guide, driver etc...) will wear a mask throughout its duration.

The temperature and wellness of all those taking part in the service will be monitored daily, excluding and maintaining in quarantine any who display fever or symptoms.

Showing your voucher on your phone will be enough, and it is not necessary to print anything.

Alcoholic drinks are not available.

The activity takes place with a guide that speaks in English.

English speaking guide specialising in the history of Ibiza.

Private, exclusive tour, there will be no one else in the group except you, your partner, family or friends.

You can book up until 10 hours before the activity as long as there are still places. Book now to guarantee your spot.

Electronic. Show the voucher on your phone.

Wheelchair accessible. This must be indicated in the reservation. An accompanying person is required.

All services published on Civitatis are carried out in accordance with our Sustainability Code. Specifically, this activity applies the following practices: Show more

No printing of documentation required.

If you have any other questions please contact us.

Per group from
US$ 150.40
No hidden fees or surcharges
Free cancellation up to 24 hours before the service starts
Book

Free! Free cancellation up to 24 hours before the activity starts. If you cancel under this time or do not show up, you will not be refunded.

These are genuine reviews written by our customers.

Hello Andrea was punctual, and pleasant. The visit very interesting. French is not always perfect but more than enough to understand each other. We recommend without worry. Opinion translated. Show original.

Silvio has been a very good guide, in all aspects. He has made us a route tailored to our interests, with excellent illustrations, knowing how to deal with four adults, of which three are retired, and two children. Opinion translated. Show original.

I travelled with small children
10

Excellent the guide, made us enjoy the charm of Ibiza, its monuments and its streets. Very well explained and much knowledge of the life and history of the island. Highly recommended Opinion translated. Show original.

I travelled with my partner
Show all the reviews
like

8.50 / 10 187 reviews
A trip to the idyllic beaches of Formentera is something that you can't miss if you're staying in Ibiza. Book your ferry ticket now!
US$ 33.50
Book
like

7.70 / 10 92 reviews
Paradise beaches with crystal-clear water, idyllic coves and whitewashed towns: Ibiza is truly enchanting. Explore the island on this guided tour.
US$ 63.60
Book
like

9.10 / 10 774 reviews
If you've just arrived in Ibiza, this free tour through the old town of this beautiful capital city is the best way to explore its picturesque corners.
Free!
Book